All disease begins in the (leaky) gut: role of zonulin-mediated gut permeability in the pathogenesis of some chronic inflammatory diseases

Precedente Prossimo
All disease begins in the (leaky) gut: role of zonulin-mediated gut permeability in the pathogenesis of some chronic inflammatory diseases 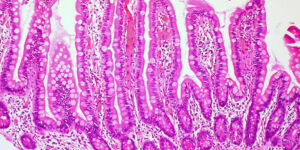 Improved hygiene leading to reduced exposure to microorganisms has been implicated as one possible cause for the recent “epidemic” of chronic inflammatory diseases (CIDs) in industrialized countries.
That is the essence of the hygiene hypothesis that argues that rising incidence of CIDs may be, at least in part, the result of lifestyle and environmental changes that have made us too “clean” for our own good, so causing changes in our microbiota.
Apart from genetic makeup and exposure to environmental triggers, inappropriate increase in intestinal permeability (which may be influenced by the composition of the gut microbiota), a “hyper-belligerent” immune system responsible for the tolerance–immune response balance, and the composition of gut microbiome and its epigenetic influence on the host genomic expression have been identified as three additional elements in causing CIDs. During the past decade, a growing number of publications have focused on human genetics, the gut microbiome, and proteomics, suggesting that loss of mucosal barrier function, particularly in the gastrointestinal tract, may substantially affect antigen trafficking, ultimately influencing the close bidirectional interaction between gut microbiome and our immune system.
This cross-talk is highly influential in shaping the host gut immune system function and ultimately shifting genetic predisposition to clinical outcome. This observation led to a re-visitation of the possible causes of CIDs epidemics, suggesting a key pathogenic role of gut permeability.
Pre-clinical and clinical studies have shown that the zonulin family, a group of proteins modulating gut permeability, is implicated in a variety of CIDs, including autoimmune, infective, metabolic, and tumoral diseases. These data offer novel therapeutic targets for a variety of CIDs in which the zonulin pathway is implicated in their pathogenesis.
Readmore: f1000research.com
Webmaster2020-12-22T11:29:49+01:00Febbraio 6th, 2020|Pubblicazioni|0 Commenti