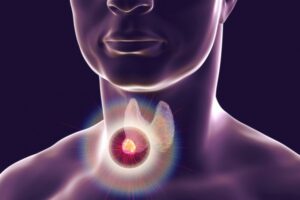 The results of phase 2 trials showed that patients taking the drug lived for 11 months without the cancer progressing, compared with six months for those receiving a placebo.

“This study is confirmation that vandetanib is effective in advanced thyroid cancer patients, not only in terms of overall response, but also in terms of progression-free survival,” said lead researcher Dr. Martin Schlumberger, of the Institute Gustave Roussy in Villejuif, France. “Vandetanib should be used as first-line treatment in patients with progressive, untreatable thyroid cancer.”

The report was published online Aug. 13 in the journal The Lancet Oncology.

For the study, Schlumberger’s team randomly assigned 145 patients with late-stage thyroid cancer either to vandetanib or a placebo.

In addition to a longer period when the cancer didn’t progress, patients taking vandetanib had their disease better controlled, with more patients having a complete or partial response to the drug, the researchers found.

Vandetanib works by targeting three proteins known to play a role in the growth and spread of thyroid cancer.

For people without health insurance, a month’s supply of vandetanib can cost more than $17,800, according to the American Society of Clinical Oncology. For those with insurance, co-pays vary by plan.

If caught early, thyroid cancer is often curable. “Typically, we talk about thyroid cancer being the great cancer,” said Dr. Dennis Kraus, director of the Center for Head & Neck Oncology at Lenox Hill Hospital in New York City. “If you’ve got to have a cancer, this is the one.”

In most cases, the risk of dying from thyroid cancer is 1 percent, Kraus noted. Treating the disease usually involves surgically removing the thyroid and the lymph nodes if they are involved. In addition, patients can receive radioactive iodine.

“It’s only the minority of patients who … develop recurrent disease or metastatic or locally advanced cancer, who go on to die of their disease,” Kraus said.

With vandetanib, these types of patients may have improved survival, Kraus said.

“It’s not a panacea,” he said. “But in a group in which we thought we had no viable treatment, we now have something we can try to treat people with and either control their disease or prolong their survival.”