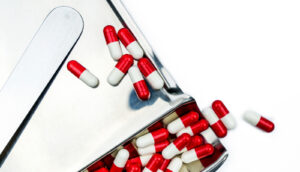 Taking certain cancer-fighting drugs while undergoing radiation therapy may not increase survival, but could instead increase side effects, according new study.

In a meta-analysis, researchers find that treatments that include both radiotherapy and receptor tyrosine kinase inhibitor—or RTKI—drugs did not significantly improve survival rates of patients, but appeared to worsen negative side effects, such as fatigue, nausea, and diarrhea, says Nicholas G. Zaorsky, assistant professor of radiation oncology and public health sciences at Penn State College of Medicine.

“In the 1990s and 2000s there was a push in oncology to study these receptor tyrosine kinase inhibitor drugs, which target receptors that are either expressed on the cancer cells, or expressed on cells that surround cancer cells,” Zaorsky says.

Understanding how RTKI drugs, which include names like Avastin, Erbitux, Iressa, and Tarceva, react with radiation therapy is important because of the radiotherapy’s widespread use, he adds.

Researchers statistically analyzed the results of 11 large clinical trials that featured both RTKI and radiation therapy. The trials, which focused on solid forms of cancer and included 5,284 patients, evaluated both survival rates and side effects. The results reveal that adding RTKI drugs to radiation therapy does not significantly improve survival, but may increase side effects for patients undergoing both treatments.

“Because it’s such a broad question and because there are so many drugs available for so many different types of cancers, we decided to do a meta-analysis using all of the published data from around the world,” Zaorsky says.

Just because the combination of radiation therapy and RTKI drugs doesn’t appear to improve survival, it doesn’t mean the effectiveness of the drugs alone are in question, Zaorsky says. For many cancer patients who have not undergone simultaneous radiation therapy, these drugs have been immensely helpful.

Additional researchers from Penn State, Mount Sinai School of Medicine, and the Mayo Clinic in Jacksonville, Florida, contributed to the study. The Penn State Cancer Institute and the National Institutes of Health supported this work.